"Nah - Rosa Parks": How a badass woman became a symbol of the Civil Rights Movement

On December 1, 1955, an African-American seamstress living in Montgomery, Alabama refused to give up her seat on a bus to a white passenger. She was later arrested for disobeying the law forcing black passengers to surrender their seats for white ones, even when they got on the bus after the blacks (yes, it was unfair). However, her actions inspired a 381-day boycott over the city's bus system and helped change the USA forever.

She was Rosa Parks , and this is the reason why she was so badass.

About Montgomery's law on buses

In 1900, the city government decided to segregate bus passengers by race. A bus would have white and "colored " sections. The first four rows of the bus were reserved for white passengers, while the blacks could sit behind them. In case all the white sections were filled, the bus drivers could "add" another white row by forcing black ones to give up their seats.

Black communities complained about the unfairness for years; but only when Rosa Parks took action, things were about to change.

On Thursday, December 1, 1955, Mrs. Parks boarded the Cleveland Avenue bus after a tiring day at work. She paid the fare and sat in the first row of the "colored" section. Then a white man got on and the white-only seats were already filled.

The bus driver, James F. Blake, asked everybody sitting in Mrs. Parks' row to move and give the seat to the white man. That means four Black people had to move so that one white man could sit.

Rosa Parks was like 'This is damn unfair and I've had enough'. She decided not to move while the other three passengers did. The driver continued to ask her to move but she responded with a firm "No". Even when the driver threatened to call the police, she gave him an unexpected permission: "You may do that." (This is so badass). Mrs. Parks wrote in her biography:

"People always say that I didn't give up my seat because I was tired, but that isn't true. I was not tired physically, or no more tired than I usually was at the end of a working day. I was not old, although some people have an image of me as being old then. I was forty-two. No, the only tired I was, was tired of giving in."

The policeman arrived and arrested her, she asked him:

- Why do you push us around?

- I don’t know, but the law’s the law and you’re under arrest.

Rosa Parks was charged for violating the segregation law even though she had always been in the "colored" bus section.

Although Rosa Parks was not the first to fight against segregation and her actions were not planned, she did inspire the Black population of Montgomery to stand up. The National Association for the Advancement of Colored People (NAACP) saw this was the perfect time to challenge segregation. Their method was non-violent and, indeed, quite interesting. 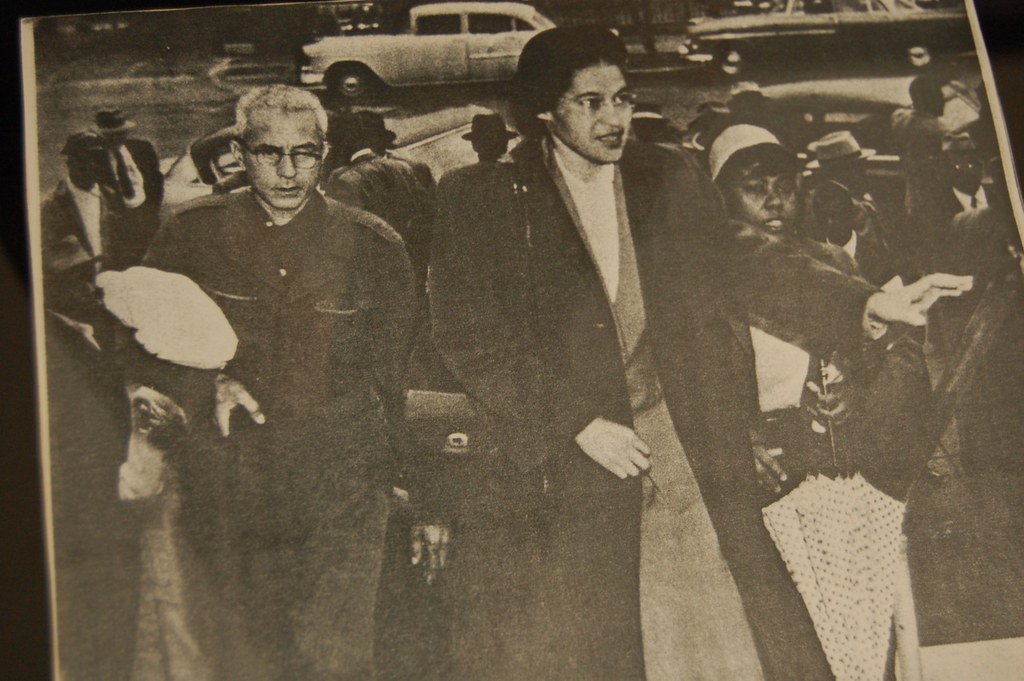 "We are asking every Negro to stay off the buses Monday in protest of the arrest and trial."

"If you work, take a cab, or walk. But please, children and grown-ups, don't ride the bus at all on Monday. Please stay off the buses Monday."

The Black community did exactly that despite the rain that day. Some took black-operated cabs with the fare of 10 cents per customer, which equaled the standard bus fare. Some even walked.

75% of bus passengers at that time were black. And the bus company lost 3/4 of their revenue just like that.

The boycott lasted for 381 days, which made most of the buses and staff idle. The bus company therefore had a serious financial crisis.

On June 13, 1956, the District Court ruled that the racial segregation was illegal.

On November 13, 1956, the US Supreme Court declared the segregation unconstitutional.

On December 20, 1956, the US Supreme Court ordered the Alabama and Montgomery buses to be desegregated. And the boycott ended.

How did Rosa Parks and the bus boycott change the USA?

For the first time ever, African Americans realized their power in the economy. No company would ever underestimate the Black Community.

With all her contributions, when she died at age 92, she became the first lady in US history to lie in the Capitol Building rotunda in Washington DC.

That's how a lady's refusal to give up her seat made history.