February is Black History Month, a time to remember and reflect on notable African American trailblazers who have left lasting legacies through inspiring a desire for change and hope. In honor of Black History Month, we've compiled a selection of Marcus Garvey quotes that will definitely make your black pride.

Who is Marcus Mosiah Garvey

During the civil rights movement, Marcus Mosiah Garvey was an American black nationalist whose charm, dignity, and courage inspired many people all over the world, particularly the black community. He was born in August 1887 in Jamaica to a family of eleven children. His personality emerged at a young age, when he took an interest in reading his father's books and took advantage of the home library. After dropping out of school at the age of fourteen, he went to work as a printer's apprentice, where he took part in a strike for better pay.

What was Marcus Garvey's contribution to civil rights? 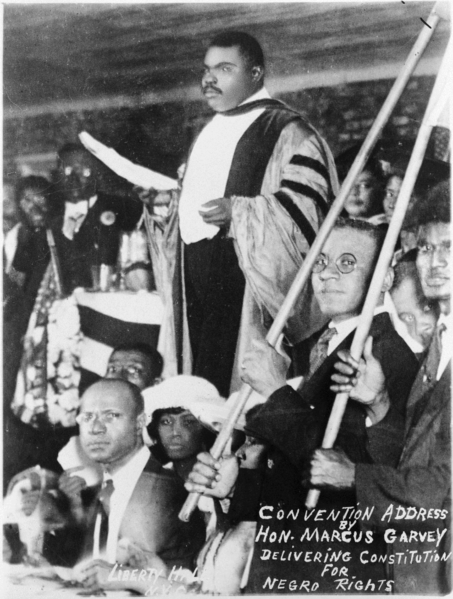 Marcus Garvey is well-known for founding active movements in the United States to combat the ideology of black nationalism. The Back to Africa movement, the Universal Negro Improvement Association, the Negro Factories Corporation, and the Black Star Line were just a few of his major movements. These movements aided him in establishing a strong reputation across the United States and establishing himself as a powerful voice for African-Americans. His outstanding efforts in defending the rights and voices of African-Americans in America served as an inspiration to countless civil rights activists who followed in his footsteps.

Here are some of Marcus Garvey's most famous quotations, which have inspired many people throughout the world and helped promote the African people's unity, economic, and political voice in America and around the world.

”There is no force like success, and that is why The individual makes all effort to surround himself throughout life with The evidence of it; as of The individual, so should it be of The nation.”

”Whipped. It annoys me to be defeated; hence to me, to be once defeated is to find cause for an everlasting struggle to reach The top.”

"The Black skin is not a badge of shame, but rather a glorious symbol of national greatness.”

”Lift up yourselves, men, take yourselves out of The mire and hitch your hopes to The very stars themselves. Let no man pull you down, Let no man destroy your ambition, because man is but your companion, your equal; man is your brother; he is not your Lord, he is not your sovereign master.”

”The man who is not able to develop and use his mind is bound to be The slave of The other man who uses his mind.”

“Hungry men have no respect for law, authority or human life.”

“You must not mistake lip-service and noise for bravery and service.”

“Men who are in earnest are not afraid of consequences.”

”If you have no confidence in self, you are twice defeated in The race of life.”

”Liberate The minds of men and ultimately you will liberate The bodies of men.”

”We must give up The silly idea of folding our hands and waiting on God to do everything for us. If God had intended for that, then he would not have given us a mind. Whatever you want in life, you must make up your mind to do it for yourself.”

”Always try to associate with people from whom you can learn something. All The knowledge that you want is in The world, and all you have to do is go and seek it.”

”Ambition is The desire to go forward and improve one’s condition. It is a burning flame that lights up The life of The individual and makes him see himself in another state. To be ambitious is to be great in mind and soul. To want that which is worthwhile and strive for it. To go on without looking back, reaching to that which gives satisfaction.”

“God does not give people positions or jobs or good conditions such as they desire; they must do that for themselves. God does not build cities nor towns nor nations, nor homes, nor factories; men and people do that and all those who want must work for themselves and pray to God to give them The strength to do it.”

“To see your enemy and know him is a part of The complete education of man.”

“A man’s bread and butter is only insured when he works for it.”

”Emancipate yourselves from mental slavery, none but ourselves can free our minds.”

”Progress is The attraction that moves humanity.”

”Men, there is much to live for, and there is much to die for. The man, The race of nation that is not prepared to risk life itself for The possession of an ideal, shall lose that ideal. If you, I repeat, must be free, you yourselves must strike The blow.”

”A people without The knowledge of their past history, origin and culture is like a tree without roots.”

”Take advantage of every opportunity; where there is none, make it for yourself.”

”I trust that you will so live today as to realize that you are masters of your own destiny, masters of your fate; If there is anything you want in this world, it is for you to strike out with confidence and faith in self and reach for it.”

“There can be no peace among men and nations, so long as The strong continue to oppress The weak, so long as injustice is done to other peoples, just so long we will have cause for war, and make a lasting peace an impossibility.”

“At no time within The last five-hundred years can one point to a single instance of The Negro as a race of haters.”

“Let The sky and God be our limit and Eternity our measurement.”

“Take The kinks out your mind, not your hair.”

“Billions of dollars have been lost to The Negro race within The last fifty years through disloyalty on The part of successful Negroes, who have preferred to give away their fortunes to members of other races, than to bequeath them to worthy institutions and movements of their own to help their own people.”

“A race that is solely dependent upon another for its economic existence sooner or later dies.”

“All of us may not live to see The higher accomplishment of an African Empire – so strong and powerful, as to compel The respect of mankind, but we in our life-time can so work and act as to make The dream a possibility within another generation.”

“Go to work! Go to work in The morn of a new creation… until you have… reached The height of self-progress, and from that pinnacle bestow upon The world a civilization of your own.”

“I have no desire to take all Black people back to Africa; there are Blacks who are no good here and will likewise be no good there.”

“The UNIA teaches our race self-help and self-reliance… in all those things that contribute to human happiness and well-being.”

“It is your mind that rules The body. You cannot go further than that mind to seek truth and to know The truth and to react to The truth.”

“Look for me in a whirlwind or a storm.”

“Our success educationally, industrially, and politically is based upon The protection of a nation founded by ourselves. And The nation can be nowhere else but in Africa.”

“There shall be no solution to this race problem until you, yourselves, strike The blow for liberty.”

“Races and peoples are only safeguarded when they are strong enough to protect themselves.”

“We demand complete control of our social institutions without interference by any alien race or races.”

“The only protection against INJUSTICE in man is POWER… physical, financial, and scientific.”

“We are men; we have souls, we have passions, we have feelings, we have hopes, we have desires, like any other race in The world. The cry is raised all over The world today of Canada for The Canadians, of America for The Americans, of England for The English, of France for The French, of Germany for The Germans – do you think it is unreasonable that we, The Blacks of The world, should raise The cry of Africa for The Africans?”

“We are entitled to our own opinions and not obligated to or bound by The opinions of others.”

“Unite all people of African ancestry of The world to one great body to establish a country and absolute government of their own.”

Throughout his life, Marcus Garvey was a well-known and renowned black nationalist campaigner. He was a hero to black nationalists at the time since he founded various movements fighting for black people across America.

Marcus portrayed the black people's remarkable intellect, ideas, and skills throughout his day. Marcus Garvey's inspirational, intelligent, and unifying quotations have been supplied in the preceding article. Hopefully, these 48 Marcus Garvey insightful quotes will inspire, influence, and provoke you. Here are some Marcus Garvey Quotes to consider if you enjoy them:  Marcus Garvey Quotes T-Shirt.